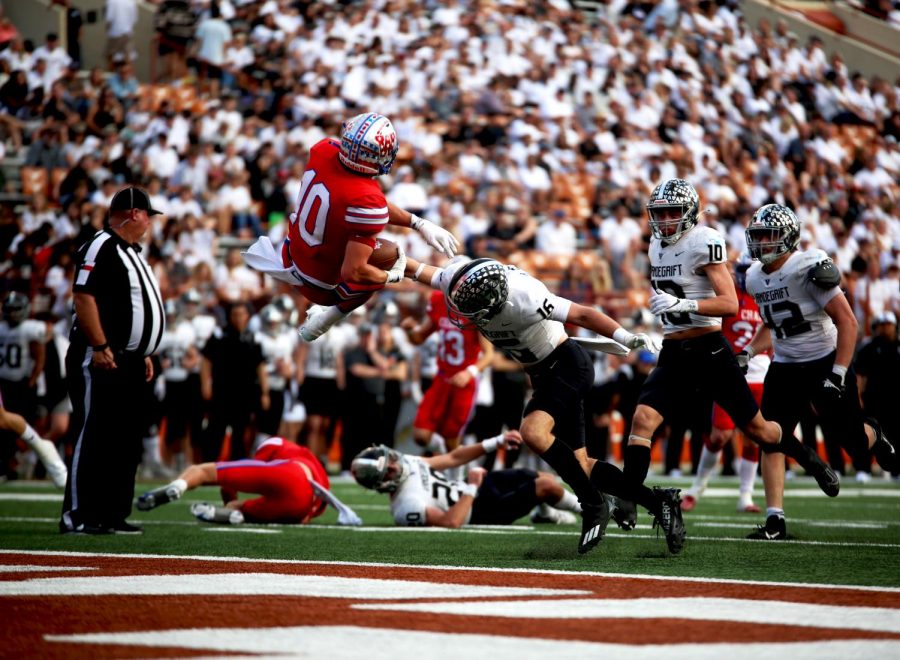 On the Horns' turf, junior wide receiver Bryce Chambers flies through the air and makes a touchdown for the Chaps at DKR stadium Dec. 4, 2021.

Over the past three weeks, the Westlake football team has continued their dominant run, tearing through playoff opponents as each round of the 2021 Texas High School Playoffs wore on. However, as the 64 team bracket has thinned out to just eight, the competition on the opposing sideline has just become more and more challenging. The Chaps’ final stretch towards the state championship began Saturday afternoon at the University of Texas’ Darrell K. Royal Memorial Stadium against cross-town rival Vandegrift.

Coming into the matchup, Westlake had rolled through opponents Hutto, New Braunfels and Pharr-San Juan Alamo North to cement their name amongst the other remaining eight teams. The Vipers cruised to the quarterfinals with wins over San Marcos, Steele and Vela. However, Saturday’s matchup was the toughest yet for both sidelines, as both teams looked to continue on to the state semifinals with a win.

Westlake received the ball to begin the contest and got off to a relatively slow start. However, the Chaps got the ball rolling with a 42 yard connection from quarterback senior Cade Klubnik to wide receiver junior Jaden Greathouse. The very next play, running back sophomore Jack Kayser took it in for a 12 yard touchdown, putting the Chaps on the board, 7-0.

Once the Chaps got going, they didn’t stop, dominating on both sides of the ball all afternoon, and eventually cruising to a 70-7 victory. The 70 points scored drastically affected the Chaps’ season points total, finishing off a school record 823 points scored in a single season, with at least one more game to play for the Chaps.

Westlake racked up 56 points in the first half, 36 of which came from Kayser, as he found the end zone six times in the first two quarters of play for Westlake. The half-dozen scores marked a new Westlake school record for touchdowns in a single game by one player, and Kayser accomplished the feat in just 24 minutes of play.

“I just ran behind the o-line.” Kayser said. “I didn’t do anything big, they’re just amazing. They make me look good.”

The Chaps’ offensive line paved the way for Kayser and the entire Westlake run game throughout the afternoon, giving ball carriers plenty of open space to make plays, and they did just that. The team rushed for over 300 yards and a total of nine rushing touchdowns from four different ball carriers.

Not only did the Westlake offense impress, but the other two units showed out as well. The Westlake defense and special teams made scoring extremely challenging for the Vipers. The Chaparral defense forced three turnovers, courtesy of interceptions by linebackers senior Jacob Leopold and junior Byers Petty and a fumble recovery by defensive lineman junior Brett Mays. The Westlake special teams made their impact on the game as well, blocking a whopping three Vandegrift punt attempts, one of which was returned by wide receiver junior Keaton Kubecka for a touchdown.

The sole touchdown of the day for Vandegrift came on a five yard run by running back senior William Sheppard in the fourth quarter, softening the blow the Vipers took in their season-ending loss.

With the win, the Chaps advance to the 6A Division 2 Semifinals, where they face their biggest competition yet, Katy High School. The game will be played at Baylor University’s McLane Stadium in Waco, on Saturday, Dec. 11 at 2 p.m. Katy has moved up on the Maxpreps Top 25 high school teams list, landing them a spot just behind Westlake as the nation’s seventh best team, and the state of Texas’ third best squad. Either way the scoreboard indicates, it’s sure to be a fun one next weekend in Waco with massive state championship implications on the line.