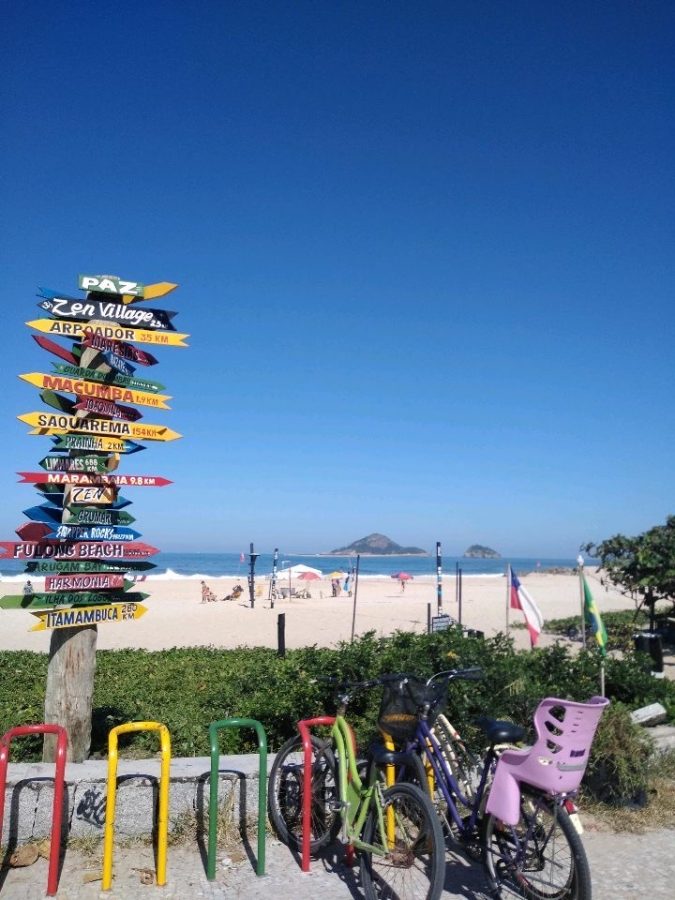 “My mom was like, ‘No, it’s gonna be fine. We’ll be back in a week and then everything is gonna be great,’” senior Lenny Ahsan said while telling an anecdote. Everything was not fine. While most families canceled their spring break plans in response to the rapidly spreading coronavirus, Lenny and her mom did not.

Most of those who did travel were back in time for their first real Zoom classes, but Lenny was not. Her week long trip to see her family turned into 6 months in Rio de Janiero, Brazil.  Who wouldn’t love a six month get away to South America? I’ll tell you who: Lenny.

“I lived in Brazil for a couple years before coming to Austin,” Lenny said. “My dad lives there, so I went to visit him over spring break. I didn’t want to go because I knew that things were gonna blow up. Then all our flights got canceled, and I ended up getting stuck there for six months.”

Lenny is a dual-citizen to Brazil and the U.S. While away, she didn’t face the challenges a foreigner would but she was separated from her friends and life back in Austin. Since the Ashan family owns a house in Brazil, they decided to extend their stay to avoid traveling during the pandemic.

“I’m pretty sure, at first, [we stayed] because we were trapped there, but then my mom didn’t want to come back,” Lenny said. “She was like, ‘We can’t travel during COVID.’ She didn’t really understand that I had to come back [for] school and other things. Even when school started this year, it took her another week to actually buy plane tickets for us to come back here.”

Since the trip was supposed to be a week long, Lenny left her iPad and several other important items in Texas.

“All of my school stuff, all of it, everything stayed in Austin,” Lenny said. “I didn’t have any of my AP Art History notes or my APUSH notes. I had to redo everything for my AP exams. Studying was literal hell. For English [class], I left my composition book and all of my art supplies as well. I was definitely going crazy by the end.”

Most of Lenny’s maternal family lives in Brazil but she rarely saw them because of the pandemic. Additionally, she did not have the ability to have social distance get-togethers with her friends in the U.S. Lenny had to come up with new ways to spend time with her friends and entertain herself.

“I guess Zoom made a huge difference positively: I would screen share, and [my friends and I] would watch movies together,” Lenny said. “”Avatar: The Last Airbender,” I loved it and that stopped me from going crazy. I read a bunch of good books, and I wrote a lot. I feel like whenever I’m overwhelmed, just writing and being in the world of my book makes me calm.”

Lenny has lived in Houston, Malaysia, Brazil and now Austin, so moving is something she knows well. Despite being a seasoned traveler, she began to miss her life in Austin.  After a while, Lenny became discouraged and wondered if they would ever make it back to the U.S.

“I was so scared because sometimes my mom would be like, ‘Oh, we’re just gonna stay in Brazil forever’ and I was like, ‘No, please, no.’ And then I was scared that I wasn’t going to come back to Austin. I don’t think I could take it because I’ve moved too [many] times. If I had to change schools again I felt like I would probably have a mental breakdown. I struggled so much to make friends at Westlake. Now I finally have a friend group [who] I feel like me [in Austin]. If I had to go to another school and make new friends that would just be too much for me — especially for my senior year.”

Even though Lenny has lived on three continents, she believes that Austin is her true home. Moving is a tiring process that Lenny does not want to experience again until after graduation.

“I felt like I was gonna rot in Brazil and never see anybody again,” Lenny said. “I really struggled with mental health over there. I got really depressed, but I feel like I’m way better here. Just in general, being in Brazil weighed me down because I don’t like it there as much.  Every place has a different feel, and I don’t really like the feel of [Brazil]. It’s so different just being in an environment where I feel comfortable.”

The entire world has been faced with the wrath of coronavirus, but each country is dealing with the virus in their own way.

“In Brazil people weren’t as scared of going outside as they were here,” Lenny said. “I guess I was not super restricted; I would go to the beach sometimes, but in general I would just stay at home. In terms of the government, the U.S. is more strict and there are rules about wearing masks. There are rules in Brazil, but it’s more [of] a suggestion, [and] I guess people don’t really care. Some people are quarantining but most people are just going out. The cases got really bad and then people actually did start to stay home.”

After her extended vacation, Lenny is ready to enjoy Austin.

“I feel kind of traumatized about traveling because I don’t want [to] travel at all,” Lenny said. “For the next 10 years, I’m probably just going to be in Austin because traveling just seems scary now. I don’t want to get stuck anywhere.”

Even though she wasn’t necessarily trapped in Brazil, Lenny learned to persevere, and she is happy to be in the comfort of her Austin home.

“I feel like [in Austin] I have more time to myself, which I feel makes a huge difference,” Lenny said. “I can hang out with people and my girlfriend. My mental health feels so much better, a lot calmer, and less overwhelmed.”