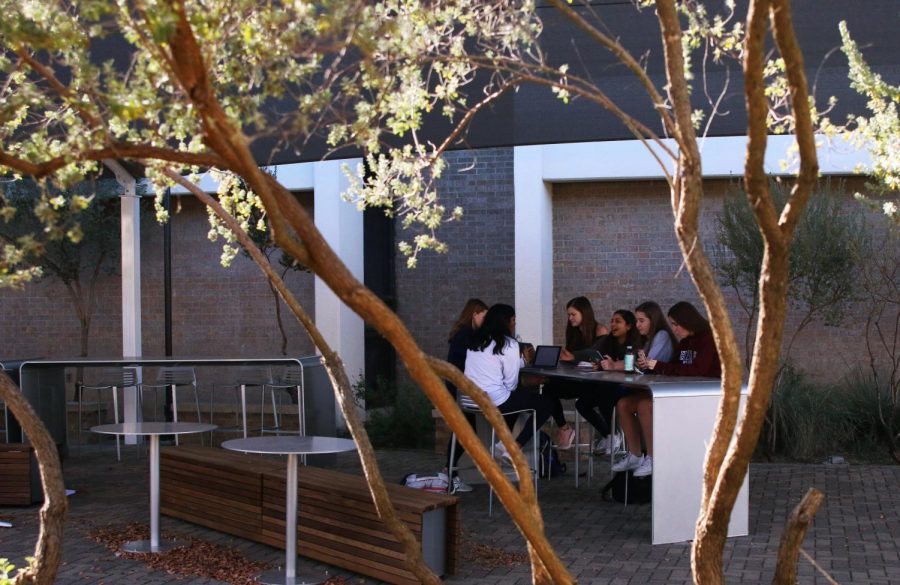 When students picture a classroom, an indoor space with a row of desks and a small window may come to mind. However, with the recent addition to the school’s campus, an outdoor classroom is quickly changing that. Now, teachers have the option to teach their lessons outdoors and students are able to eat lunch or study in a classroom while connecting with nature.

“The PTO funded [the outdoor classroom] pretty quickly this year,” said AP History teacher Cathy Cluck. “We started this year thinking ‘let’s take this before PTO’ and we now have it open. [We are] so grateful for all the PTO does for us, this was a big budget item and they’re the ones who [said] ‘let’s push this through.”

Cluck played a large role in turning the Outdoor Classroom into a reality along with many other staff members, after 3 years of working on the idea. She was passionate about it due to her love of taking her students outdoors. She also strongly believed that being around nature improved her students’ focus. The classroom was officially opened at a ribbon cutting ceremony on Dec. 6th, where students who first sat in the classroom were given a piece of the ribbon as a keepsake. Though before it was opened, a lot of thought went into planning the area, in hopes of maximizing the use for students and staff.

“We spent a lot of time looking for furniture. We’re hoping that at some point if we want to get a big screen, and set it up [we’ll be able to],” Cluck commented when asked about the process of turning this idea into a reality.

Furniture with soft surfaces was most commonly selected, in order to provide students with the ability to write or eat at their desks. In addition, the area was covered to provide shade during the hotter months. It was set up with flexible seating arrangements to allow for different classroom uses. This space can seat up to 35 students at a time, and perhaps even more. Cluck still believes there could be some improvements, such as a way to project and perhaps ceiling fans. However, it is already serving many purposes for the school’s community.

“It’s available for kids during lunch unless it’s booked for a class,” Cluck said. “On beautiful days it’s so much easier to get out there. It’s a lecture space, it’s a small group setting, it’s just a study area.”

Many teachers are already showing interest in using the space, with a class already having utilized it a couple days ago. However, currently the main use of the space seems to be by students during lunch time, since it provides shade and tables during these crowded hours. Besides providing a lunch and study space for students, the space gives teachers and staff a chance to change up their normal routines.

“It also gives teachers an option. For people like me, I have to leave my room throughout the day and so it’s just a chance to change things up,” Cluck said.

While students rotate throughout different classrooms every day, some teachers stay in the same space for hours. The outdoor classroom allows for them to have the opportunity to switch it up. Students are also appreciating the ability to include this new surroundings into their day.

“It’s really creative and it’s a good natural environment,” freshman Emma Payton said when asked about what she thought of this new addition to the campus.

Being outdoors can really help students and staff to relax and relieve stress while working, and this space can achieve that.

“We want kids to be able to have another space to gather, to congregate, to study, to work,” Cluck said.