Students travel to the Amazon 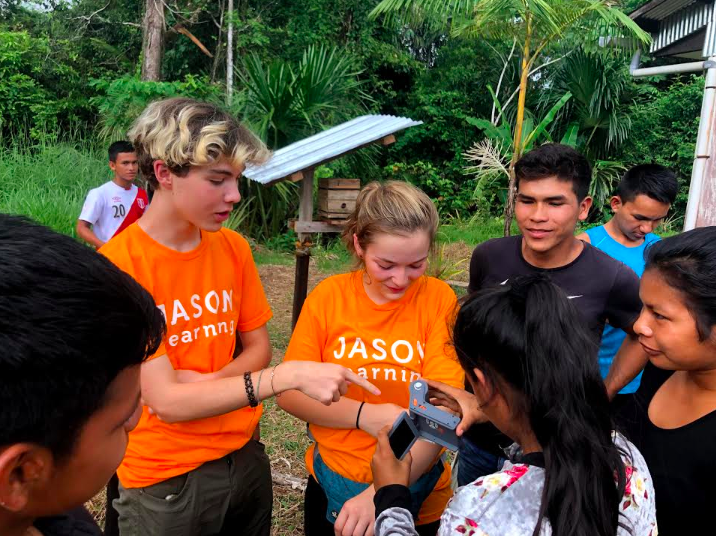 They made sure to take every opportunity they could.

During the fall of 2019, AP Environmental Science Teacher Lauren Gehman and Senior Quinn Erickson traveled to the Puruvian Amazon with the JASON Learning Program. The two went to learn research techniques while studying arthropods, such as insects and spiders.

“We were studying arthropods, and there were all kinds of insects that we were looking at – lots of butterflies and moths,” Gehman said.

Though they saw many different species, that had to choose just one to focus on.

“The big [reason] why we were [there was] not just to experience everything but it was also to do a little bit of research and learn field research methods,” Gehman said. “So, they let the students pick something that interested them on insects, and they we spent 24 hours collecting as much data as possible. [They] formulated questions that [they] had about the insects, what kind of hypothesis could [they] form and from that [they] figured out the data and [they] collected. We had 24 hours where we just kept running back and forth between the lodge and the canopy collecting as much data as we could.”

“We experimented with known essential oil orchid bee attractants in order to observe their populations at varying levels of canopy,” Quinn said.

After conducting this research, they brought their data to local high schools.

“We took that research that we did and we went to one of the local high schools, and we shared that information with them of what we learned, and we learned a little bit about what they were doing,” Gehman said. “And then after, we talked about that and introduced ourselves. We just wandered around with them and collected insects.”

While researching, they saw many types of incredible insects such as Blue Morpho Butterflies, Orchid Bees, Carpenter Bees, Tarantula Wasps and Brazillian Wandering Spiders, just to name a few.

“The Blue Morpho [butterflies] are not necessarily the most prevalent, but they are the easiest to see. This one the first butterflies they caught, which was really amazing,” Gehman said. “When they fly, their wings flash with bright blue every time they go,” Quinn said.

The place they did their research was called the ACTS Lodge.

“When we went to the ACTS Lodge, the research station, we went to the canopy [and] did a lot of our research there,” Gehman says. “These researchers built this area with 16 different platforms around trees and then you have these bridges between. But these bridges are just ladders that they have tied together and put some wood on it so you don’t fall through. And then you have this rope tied up to this metal that’s there, so it kind of sways when you walk on it. I think the longest one was a quarter mile.”

Along with research, they participated in many outdoor activities as well.

“The first couple days we were there we went on lots of birding expeditions. Either morning boat birdwatching or hikes through the forest. And at night, [we] did the exact same thing,” Gehman said.

When their trip was finally over, they parted with sad feelings.

“[With] this trip I’m very sad to be back. I love my students, but when I left I was actually very, very sad because this was such an inspiring and eye opening experience,” Gehman said. “I’ve learned a lot from this. We were just constantly learning something. Even when they were just like ‘this is optional to do’, I’m like ‘I’m going to do it’ because I’m learning so much and this is so amazing.”

Something that they noticed, however, was the plight of the Amazon.

This deforestation will likely cause a multitude of problems.

“It’s just destructive in pretty much every sense of the word,” Quinn said. “They’re also worried it will increase urbanization in Iquitos, and will then lead to expansion and more destruction of the rainforest. There are a lot of efforts, not only like petitions but also efforts in Peru, protests, to stop it.”

Sadly, these efforts seem to not have much of an impact.

“As we were going back into Iquitos, we saw all of the construction already underway,” Gehman said.

Although they saw many of the sad sides, this experience was incredibly enriching.

“I would suggest this [experience] for anybody,” Gehman said.

There are many other trips through JASON Learning that you can take part in.

To get involved on one of these trips visit https://www.jason.org/argonauts.