Alum, family and friends gather in commons to celebrate 50 years of Westlake 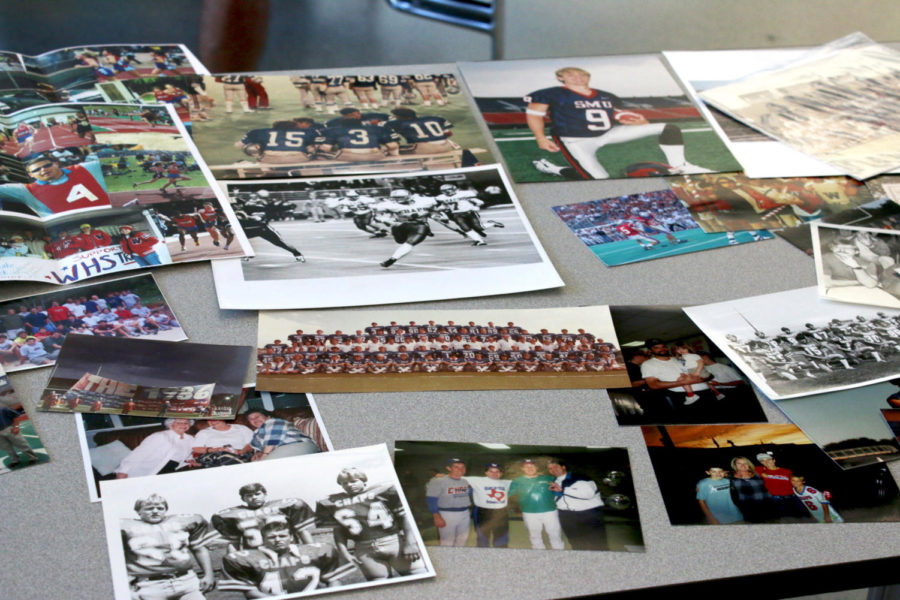 Photos of football from the past are spread on tables in the Chap Court at the Westlake Alumni Association Ceremony Oct. 19.

Past Westlake graduates, their families and friends gathered together on Oct. 19 to recognize distinguished alumni, take a trip down memory lane and support the 50 years since Eanes Education Foundation (EEF) was established.  KXAN meteorologist David Yeomans (’05 graduate), who was the presenter, told some jokes. A moment of silence was given to first football coach Ken Dabbs and first year graduates were given a round of applause, but the big event was the unveiling of the Founders Circle plaque.

The Founders Circle is the highest level of membership one can join in EEF. There is an initial $1,000 donated to the foundation in order to be apart of it, and from then on the life-long members can fundraise and participate as they wish. The names and graduating year of those apart of the Founders Circle were engraved onto the plaque to be displayed in The Commons. Those who missed out on having their names on this plaque can join the 50th Anniversary Club and will be represented on the following plaque in 2020.

The funds are used as a financial lifeline for Eanes ISD, meaning the money is there to support any activities that need it. April Newton Mangum, Alumni Association coordinator, teamed with  executive director of EEF Cathi Haralson, and EEF board president Jennifer Ramburg to create a visual representation of the support that the foundation has been given since the ’70s, and in the hope of showing the current students how they too can support the community that has been there for them.

“It’s a visual way to show that the current students have something to look forward to,” Mangum said. “We want them to see that they can still be apart of Westlake, even when they graduate.”

Another main event was the recognition of five distinguished alumni. Toody Byrd, long time and beloved guidance counselor, was an honorary alum who was recognized for her 21 years here as a tribute to her recent passing. Drew Brees (’97 graduate), NFL quarterback for New Orleans Saints, was also a distinguished alum award recipient, however he wasn’t present at the ceremony. He recorded a video of him expressing his thanks and appreciation for the school that was played. Another distinguished alum that wasn’t able to attend to receive his award in person was Rich Riley, former CEO of Shazam and co-founder of Homepoint. Matt Nader (’07 graduate) and advocate for sudden cardiac arrest awareness, came to receive his award.

“I am so proud and honored to be back here,” Nader said. “[This event shows how] Westlake has created a culture that transcends time.”

On Sept. 15, 2006 Nader was speaking to Coach Steve Ramsey (now principal) during a football game in College Station when he went into cardiac arrest. His parents’ CPR attempts didn’t revive him, but an Automatic External Defibrillator (AED) did. Ever since, he has pushed for the passing of a bill that provides funding for AEDs to be placed in every public and private school in Texas.

The last alum who was recognized was Alexis Jones (’01 graduate), author of “I Am That Girl” and founder of ProtectHer, a company that revolutionizes sexual assault prevention.

“I’m incredibly honored, but also very overwhelmed about being back,” Jones said. “The nostalgia has started to sink in and all of a sudden I’m remembering things I haven’t thought about in a decade.”

Not only was she being celebrated as a distinguished alumni, but Jones was also the keynote speaker. She read a letter to the audience that she wrote in high school that was addressed to herself in the future. Jones’ teenage self was hoping she would follow her dreams, never forget how to be fun and always try to make the world a better place. She reflected on her time in high school and how that helped her to be successful in her life and career.

“The [fact that I’m reading what I’ve written as a teenager] is nerve racking for me, it’s very emotional,” Jones said. “I was so intense around school and grades [when in high school], but it definitely taught me to work hard and never give up.”

Principal Ramsey also spoke at the ceremony. He talked about the respectful values that this staff and student body continue to implement 50 years later, and how the important aspect about being a Chaparral is not winning, but about being part of a community that is bigger than the individual.

“If you look around, red W’s are everywhere I can put them, and so much blue paint because [I want everyone to know that] it means something to be from Westlake,” Ramsey said. “Seeing you all in this room reminds me of that.”