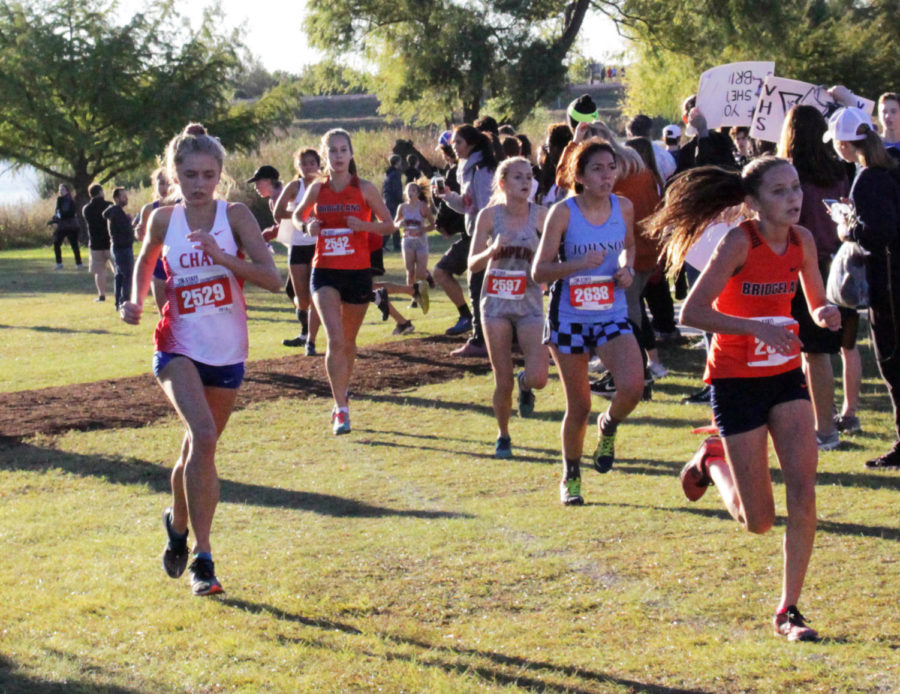 Sophomore Cassidy Beard leads the team at the State meet on Nov. 3 which was held at Old Settlers Park. Beard finished with a time of 19:14.4, a new personal record.

The girls cross country team has had a groundbreaking season, qualifying for the State meet for the first time in 12 years and with junior Elise Smoot setting a new 5k record for Westlake of 18:23.4 on Aug. 31 at the Chap Invitational.

“It feels good [to set a new record],” Elise said. “It was a good experience.”

At the State meet which was held on Nov. 3 at Old Settlers Park, sophomore Cassidy Beard finished first for Westlake with a time of 19:14.33. Junior Maddie Dawson, freshman Evan Biles and junior Elise Smoot finished second, third and fourth for Westlake, respectively. Juniors Abby George and Kasey Hendrix finished with one second in between each other, and junior Leah Jackson placed two spots behind them.

“Making State for the first time in 12 years was an unbelievable accomplishment for our team,” Maddie said. “The entire season, we took each meet as a practice State run, in hopes to finally compete there. Our ultimate goal was to qualify for State, and the team couldn’t be more proud that we did. We leave the season feeling proud, happy and hopeful for next year.”

Cassidy, who led the team at the State meet, also hit a new personal record, despite losing one of her shoes half way through the race.

“It was a great experience,” Cassidy said. “It brought our team closer together, and it truly felt like we’d stepped up and that we’re in the big leagues now. It was kinda hard because I was running most of the race with a shoe barely on, but then I kicked it off. So, I was running with only one shoe which was kind of painful, but I was really happy in the end to see that I PR’d. I was a little mad that I didn’t break 19 [minutes], but it was a great experience.”

As a freshman, Evan came in to the most successful girls cross country season in over a decade. Her addition to the team was a key factor to the Chaps’ success throughout the season.

“It was pretty cool being on the State team,” Evan said. “This season was a lot longer than middle school, and my body is pretty tired. I’m ready for a long break.”

The team placed first in the District meet and third at the Regional meet. Leah, who finished first overall at Districts in the JV race, was the first alternate in the case that one of the seven varsity runners had to drop out. After sophomore Elina Mettaelae was injured, Leah stepped up to run at Regionals and State.

“It was kinda stressful at first ’cause I didn’t know if I could help the team,” Leah said. “I knew I was a lot slower compared to Elina, but once we got to State, there wasn’t as much pressure. It was easier to feel like I should be there since I was a part of getting there.”

The Regional meet, which was held Oct. 22 in Corpus Christi, was a monumental race for the team.

“[Elina] got hurt right before Regionals, so we weren’t quite sure we would make it to State,” Kasey said. “But everyone had the race of their lives [at Regionals] which allowed us to push through to State.”

Another factor overcome by the team was the change in leadership after Patrick Lantzy, who coached the girls track and cross country team for the previous four years, left at the end of last year. Boys cross country and track coach Bert Bonnecarre stepped up to fill the role of the girls coach while continuing to coach the boys as well.

“I felt like [filling in for the girls team] needed to be done,” Bonnecarre said. “I knew that if I didn’t take it over, it was probably gonna pass to someone who didn’t know [the team.] The other thing is that I thought that last year [they] should have been in the State meet, and I just felt like some things needed to be done differently. I tried to instill some toughness, and I tried to instill the fact that [they] are good. I knew that the ability to race was already in [them,] it was just convincing [them] that it was there.”

Many of the athletes experienced a dramatic improvement in their times as the season progressed. Most notably, junior Abby George dropped nearly a minute off her time from the first meet of the season to the State meet.

“[My improvement] probably had something to do with Lantzy leaving,” Abby said. “Everyone was kinda down ’cause of that, and I felt like I needed to try harder to help out the team as much as I could. I felt accomplished, and I felt like it paid off when I got to go to State.”

Her progress helped to solidify the team into a powerful unit that dominated in meets, something Bonnecarre certainly took notice of.

“I’m very happy for her,” Bonnecarre said. “I’m ecstatic for her. Same thing for Leah. I think both of them improved a great deal. I can’t tell you how happy I was for everyone, but in particular those two girls.”

Bonnecarre accounts the team’s success largely to a change in mentality.

“I think early on there was a lot of the old crying, ‘we can’t do this’ stuff that I listened to last year,” Bonnecarre said. “I think what happened was, early on, we changed the culture. At the beginning of the season, I actually had a couple girls come up to me and say ‘we can’t do this.’ But, three weeks later [they] were doing it, and I was going like, ‘what do you mean you can’t do this? You can do whatever you want to do.’”

Overcoming mental barriers helped the athletes to improve. They learned to take each race one at a time, building up to the State meet.

“The biggest thing in coaching is convincing people they really want to do this,” Bonnecarre said. “It’s like I’ve said all along: you can’t eat an elephant all in one bite, but you can if you eat it one bite at a time. I think that’s the biggest thing people don’t get past. They don’t realize that they can eat the elephant. When I started with the girls, that’s where I found them.”

Bonnecarre said the improvement the team has experienced this year has set them up for a very successful season next year.

“I think next year going into the season, the boys and girls will be a lot more unified as a team,” Bonnecarre said. “Unless five people fall down and break both their legs, I think we’ve got a really good chance to win the Regional meet.”

As for what to expect during track season, Bonnecarre is confident in the team’s potential.

“I think in track you’re going to see some pretty outstanding performances,” Bonnecarre said. “There are a lot of girls out there that don’t realize how fast they can run.”