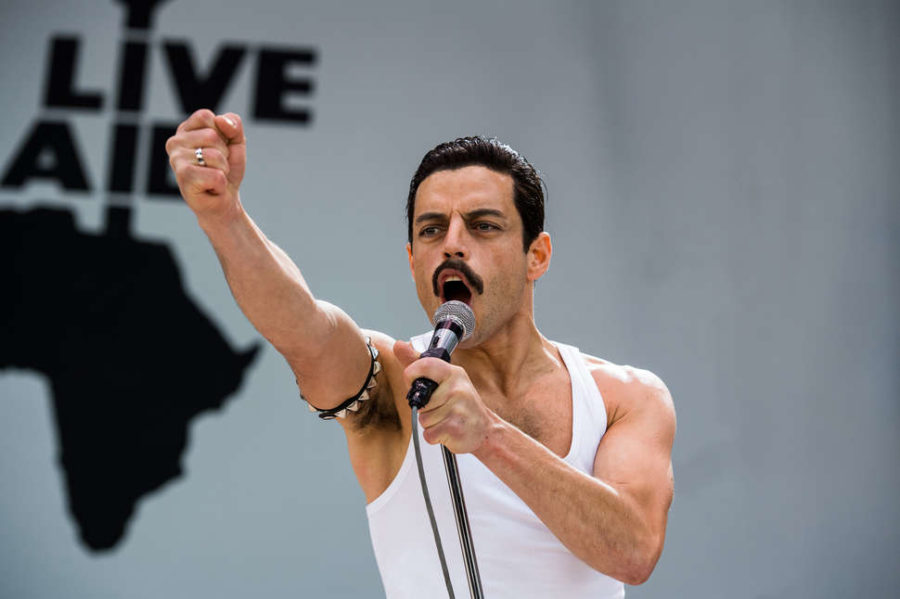 There are very few films that give me an unwelcome and overwhelming urge to jump out of my seat in a movie theater and start singing my heart out (off pitch, of course). The newest addition to this short list of films: “Bohemian Rhapsody.” While this movie makes it extremely hard for me to not spontaneously stomp twice and then clap over and over to the beat of “We Will Rock You,” the quality has less to do with the filmmaking and execution than it does the sheer talent and catchiness that Queen’s music provides.

“Bohemian Rhapsody,” released Nov. 2, retells the story of the rise of the band Queen from 1970 to 1985, and more importantly, Freddie Mercury, the band’s lead singer, played by Rami Malek from “Mr. Robot.” The film, directed by Bryan Singer, starts with Mercury as a young adult living with his parents. He eventually introduces himself to Brian May and Roger Taylor, and they go on to form Queen. The movie shows how all the albums and major hits were recorded, what tour life was like, turmoil among the band, its recording label and management team, and an inside look into Mercury’s isolating fame-fueled lifestyle.

Queen had and still has an abundance of devoted fans and casual listeners who they have accumulated through the years. This made it a given that the film would be a box office hit, which allowed the film to have such a large budget of $50-55 million. This was made very evident in the costuming and set design. Each character was decked out in elaborate and realistic European ’70s and ’80s fashion, with Mercury, of course, wearing the most flamboyant of the outfits. The film was very appealing to the eye, especially for anyone who is a fan of retro decades.

But where Bohemian Rhapsody excelled in recreating and throwing the viewers into the world of Queen, it lacked in the actual storytelling of the film. The film’s run time is two hours and 13 minutes, and they did not put that time to good use. The film covers Queen from their beginning in 1970 all the way to their Live Aid performance at Wembley Stadium in 1985. Fifteen years is a vast period of time to cover in two hours, so I understand why the film may not be able to go in-depth on every decision and event that took place. That being said, I don’t think wasting 20 minutes at the end of the film to recreate the Live Aid performance in its entirety was a wise decision. The pacing of the film was way off of what it should have been. The beginning was essentially montage after montage of either the band performing on tour, recording an album or developing relationships with significant others, themselves and their management team, separated by a major hit or two. The first hour just barely grazed the surface of the beginning of Queen, with way too much emphasis placed on Mercury’s relationship with his former fiancé Mary Austin.

The film really struggled to decide which aspects of the story should be focal points.There was a moment when a band member mentioned having to “get home to the wife and kids,” in passing, which was a major shock because at no point was the audience made aware that any of the members had married. It was like the creators just assumed the audience would eventually catch on to the information that was left out in the storytelling. There was a heavy reliance on dialogue, character appearances and blocks of text to fill in the gaps of information.

Despite the disappointing pacing of the film, the content was pretty eye-opening. The film goes behind-the-scenes and really reveals the story that not many got to see at the time Queen was active. Mercury lived a very private life; he only revealed that he was suffering from AIDS two days before passing from the disease, so this is really one of the first times a large audience is exposed to what we understand to be the true story.

Walking in, I didn’t know what to expect, but I thoroughly enjoyed the story, visuals, characters, music and information presented. I came out of the theater with a better understanding of not just Queen, but the lifestyles of rock stars and gay people in the ’70s and ’80s, and for that, I believe the film was worth the price of the ticket.