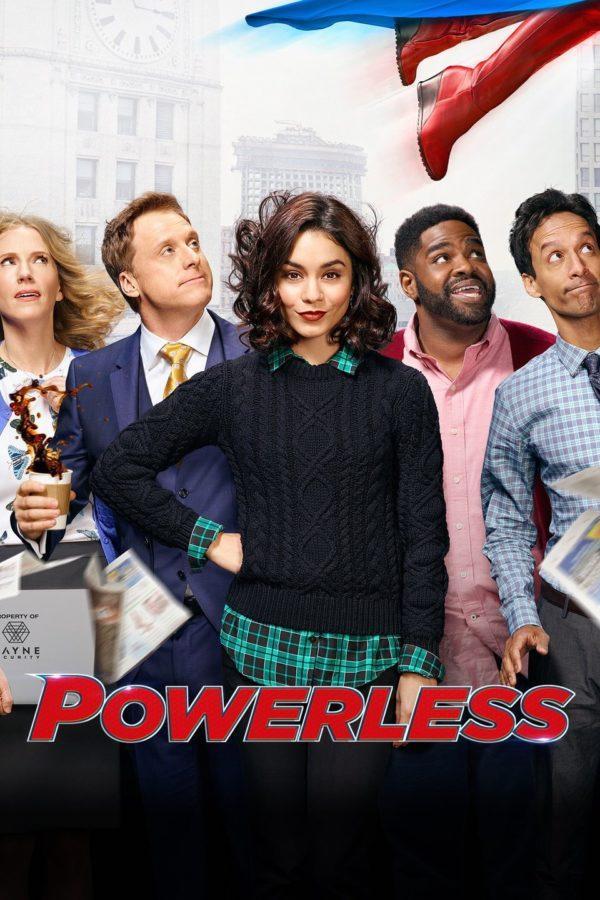 NBC’s new show, Powerless, is certainly interesting, to say the least. Featuring Vanessa Hudgens as the main character, Emily Locke, it shows the humorous behind-the-scenes of the business that protects citizens in the DC universe. Being six episodes in, the audience now has an understanding of what the show is going to be like, and I have to say I am enjoying it, but I’d advise against getting too attached. My guess is that, at the end of this season, Powerless will be cancelled, but it will have been fun while it lasted.

Each episode of Powerless has its own little plot, but the characters stay the same throughout. Emily is an excited and inspired new Director of Research and Development at Wayne Security, a business run by Van Wayne (Alan Tudyk), a cousin of Bruce Wayne. In the office, Emily originally has a hard time getting the other employees to give her a chance, because they’ve had so many new bosses and she comes off quite strong at some times. Eventually they warm up to her, though, and you get to see their antics in Wayne Security.

While the show is funny and entertaining, I’m almost certain it will get cancelled after this first season. Because it takes place in the DC universe and isn’t about the superheroes themselves, it doesn’t want to cast people in the roles of superheroes who aren’t the same as the ones in the movies. That being said, they find clever ways to get around showing those characters. In the most recent episode, Batman moved so fast the audience (and the characters involved in the scene) couldn’t see him. It’s a way of including the well-known superheroes in a side-story for their universe, but it’s hard to do well.

The acting is also slightly exaggerated. They have a sort of comical acting where they don’t take themselves very seriously. It feels like they’re making fun of themselves by making bad jokes in an obnoxious way and repeating it throughout the show. Emily also seems to get put into awkward situations with her coworkers quite often, which they tend to amplify to make the audience find the moment funny, not cringeworthy.

If people begin to watch the show and appreciate it for what it is — a humorous DC show with cheesy acting and silly situations — maybe it’ll last for a little bit. However, it’s only really good for lighthearted entertainment. If TV-watchers are looking for a show to get serious content out of, this show will start to disappear. I’m hoping this show lasts longer than I fear it will, because it is fun to watch. The characters are each given their own personalities and the episodes are very entertaining to watch, making this a show I do thoroughly look forward to each week.