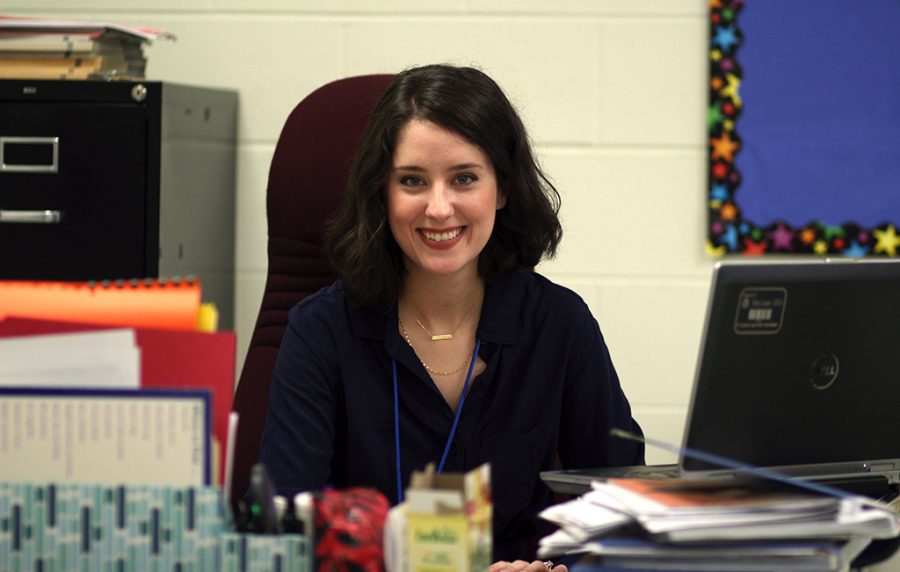 Ms.Bergmen, the new French teacher has a busy schedule of taking on Madame Lucera's previous task of teaching all four French levels, but with more modern practices.

The new year comes with new classes, new friends and this year in particular, new teachers. Coming back to school after summer break can be stressful and challenging, especially finding out teachers you’ve had for the past years are gone. Among the 47 new teachers and staff, the language department experienced the most changes. Both the French and German teachers retired after their many years of educating, and although these changes were influential, new teachers are stepping up to fill their places. One such teacher is Laura Bergman, or Madame Bergman as the students call her, who will be taking over the French department.

Bergman has been teaching on and off since 2006, but more recently taught French at Clear Lake High School in Houston for three years before coming to Westlake. Speaking French and learning the language began for her in high school and has had a major influence on her life since.

“I’ve been speaking French since I was 15,” Bergman said. “I started taking it in high school, and I really liked it, so I just stuck with it. I got an undergrad degree, masters, and then I lived in France for four years.”

Bergman moved from teaching at one academically rigorous high school to another.

“My last school was a really high performing school and [Westlake] is even more high performing,” Bergman said. “I get the impression that a higher percentage of the students here are more driven and more serious; like almost all of them.”

Switching into a new school and taking over after someone who has taught there for 37 years is challenging. Bergman, although still getting used to the change, is appreciating her new classes and students.

“I’m enjoying all the classes.” Bergman said. “I’ve noticed a lot of the kids, when they leave the classroom here, say thank you. That has really made a good impression.”

Bergman also feels that these French classes are well prepared for her curriculum.

“I met a few kids before school started,” Bergman said. “They came in and introduced themselves and were talking to me only in French. Whether it was level two or three or level four, I’m really impressed.”

Bergman has been teaching for about 10 years and enjoys many aspects of being a teacher. One thing in particular she finds rewarding is seeing her students excel.

“For me it’s really exciting getting to see kids make progress, and when I see them recognize that they made that progress,” Bergman said. “I feel good and confident about what they’ve accomplished and how they’ve improved and grown.”

All in all, Bergman is looking forward to this new chapter at Westlake. Her goal is to influence new students and show them all the benefits a foreign language has to offer.

“I like interacting with the students and getting to know them,” Bergman said. “It’s one of the positive aspects about teaching a foreign language. The whole goal is to communicate with others and to teach people how to interact with people who live in different countries, who speak different languages; it’s all about getting to know other people and sharing a part of your life with somebody else. So I like helping students get to know each other, get to know different people, different places and I like to get to know them as well. That’s the whole point of being here.”