Chaps beat State third-ranked Katy in home thriller; take over No. 1 spot in 6A State ranking 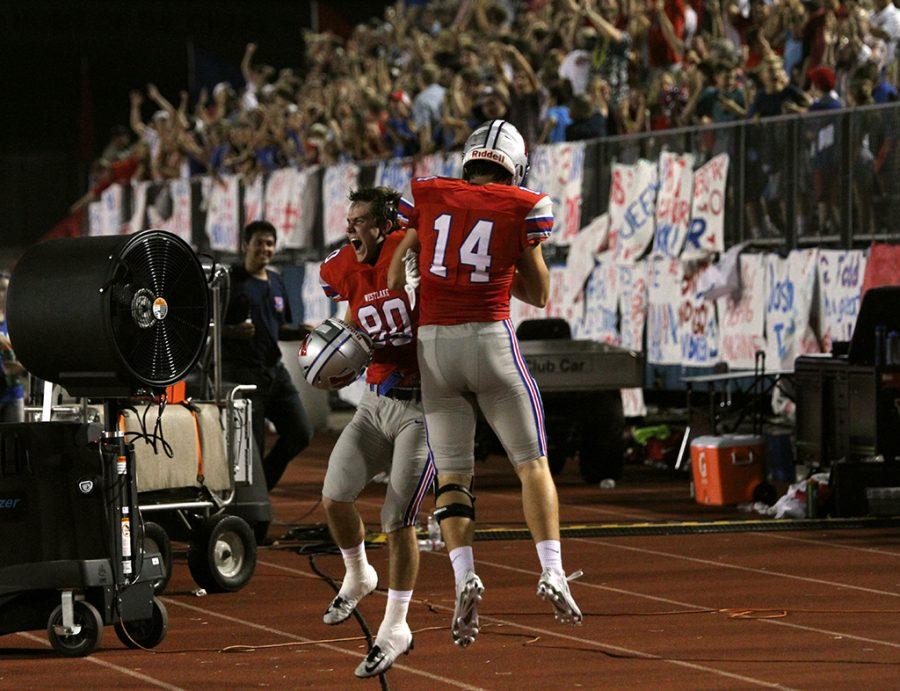 As the clock hit 37 seconds left in the fourth quarter of last Friday’s game against the defending State champion Katy Tigers, a roar erupted from the Westlake stands. As Katy, down 32-29 and without possession of the football, took their third and final timeout of the game, the Westlake fans stood up and cheered, realizing that the game was won. The only thing standing in the Chaps way was one more kneel down, which quarterback senior Sam Ehlinger took, to end the game. The celebration of a well-fought victory began.

“Before the game, everyone was nervous,” safety senior Luke Hodes said. “Not only was it the first game of the year, but it was against a really great team. The whole team also felt a strong sense of belief that we were going to win, because of all the hard work we put in and the brotherhood we built over the months leading up to the season.”

The Chaps started off the game’s scoring with running back senior Connor Howard’s long touchdown run in the second quarter to take a 6-0 lead. The Chaps next possession didn’t lead to the same result. They were forced to punt to Katy, but Katy wasn’t able to cleanly recover the punt, and Westlake was able to create a Katy turnover and take over on the Tigers’ 11-yard-line. The Chaps then scored from the one-yard-line on a junior Isaiah Faz carry and converted their two-point-conversion to take a 14-0 lead heading into the latter part of the second quarter. Katy was able to get on the scoreboard at the end of the half on a long Deondrick Glass touchdown run to cut the lead to 14-6, but Westlake took an eight-point-lead into the third quarter. Although the Chaps had the halftime lead, they weren’t celebrating just yet.

“We weren’t satisfied because we knew they were a proud tradition,” wide receiver senior Andrew Boykin said. “They were going to come out ready to play in the second half.”

Katy opened the second half looking much sturdier on offense, scoring 13 straight points to take a 14-19 lead late in the third quarter. The Chaps would not let the game slip away though, and with the aid of a long pass from Sam to Conner inside of the Katy 10-yard-line to set up a first-and-goal, Sam was able to punch it in and put the Chaps up 22-19. Katy was able to answer with a field goal, and they tied the game up 22-22 heading into the home stretch.

The Chaps were the first team to score in the fourth quarter with a field goal by senior Mauro Montemayor to take a 25-22 lead with just more than seven minutes remaining. As the game came to a close, the Chaps found themselves with the ball, and the lead, with five minutes to go in the fourth quarter. Sam was able to lead the Chaps down the field and score on a Johnny Manziel-esque touchdown pass to Andrew to give the Chaps a 32-22 lead with a little more than two minutes to play. Katy scored on a long touchdown throw, but it was too little too late, and they gave the Chaps the ball back with just less than two minutes left. The Chaps were able to run the clock down and seal the game, taking home the victory in a close contest, 32-29.

“At first it was just so unreal to me,” linebacker senior Levi Jones said. “It was such a great feeling to accomplish something you’ve been working so hard for.”

The Chaps not on the field were constantly cheering on their teammates, making sure to stay involved in the game in whatever way they could.

“During the game it was all-around excitement,” Luke said. “Everyone on the team lost their voice from cheering on the sideline. After the game everyone was so relieved and so happy that all our hard work and early mornings had paid off. But we also realized that this was our first game of the season and we still have to focus on the other tough teams that we will face throughout the year.”

The Chaps came into the game with a bad taste left in their mouth after last season’s close loss to North Shore in the State Championship game. Katy, on the other hand, came into the game on a 16-game winning streak and a dominating performance over the Chap’s rival Lake Travis in their final game of last season. Both Dave Campbell and Max Preps have ranked the Chaps No. 1 in their high school football rankings after Lake Travis was defeated by Converse Judson 35-28. The Chaps have valuable momentum heading into their game against Liberty on Sept. 2.