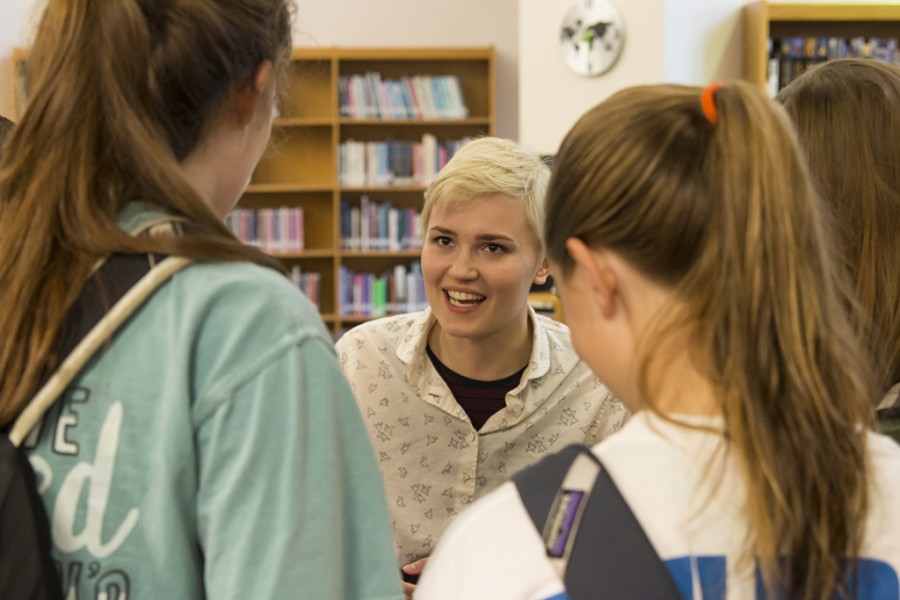 Author Veronica Roth speaks to Westlake students about the movie adaptations of her novels.

In March, Westlake had the honor of hosting bestselling author of the Divergent series, Veronica Roth. After a moving speech and slide presentation on her novel and writing process, Roth answered audience questions, which The Featherduster took the liberty of recording.

Where there any other dystopian novels that inspired you when writing Divergent?

I actually read 1984 for the first time in 8th grade. It was the second dystopian novel I’d read, after The Giver by Lois Lowry, which is such a good book. I love it. I actually love anything she does. But anyway, that was the first time that I’d even heard about the genre of dystopian fiction- I did a whole class project on it. I didn’t even know that genre existed before then.

In 1984, there was a specific thing that inspired me. Do you guys know the “rat mask?” So basically, in the book, in order to break this guy down, they expose him to one of his deepest fears, which is rats. [Laughs] It’s really dark, this part of the book. But that scene was definitely in the back of my mind when writing Divergent. But truly, dystopian books weren’t as big a thing while I was writing as they’d become by the time Divergent came out. The thing about publishing is that there’s a delay- it might take up two years to get your book published, and by then it’s too late for it. So when Divergent came out, it was released with this huge wave of other dystopian books, after The Hunger Games but before a lot of others. So really, I didn’t have many other modern inspirations, but definitely 1984, and definitely The Giver.

When did you realize that you wanted to write Insurgent and continue the series?

So it was basically after I finished the rough draft of Divergent. It didn’t feel completely finished to me. It’s not a cliffhanger, but it’s not completely resolved. So I guess I always wanted to write more, but the thing is that you’re not sure if anyone’s gonna want them. So I started by just seeing what I could do with a first draft. But when my agent submitted it to editors for me, they asked me for outlines of possible future books, and that’s when I outlined Insurgent and Allegiant for them. So it’s kinda like, always, but then when I found out they wanted it, I was like, I will write it!

Who is your favorite character in the series?

My favorite character? Ugh, I have a boring answer. My boring answer is that Tris is my favorite character — she lived in my head for years, and I’ve just always found her really interesting. Her and I are very different people- she’s super impulsive and tough and brave, and I’m…not those things. But that’s why it’s interesting, I think. To let her make these mistakes, and learn from them – or not, as the case may be, and to deal with someone who’s so harsh to the people around her. I don’t know, I just kinda find her really interesting. She’s a tough kind of lady that I really admire. Recently I discovered that all the women I admire are all the women who terrify me, which is good, I think. It’s a venn diagram that’s mostly a circle. Those kind of people really fascinate me and I find them so fun to write about.

How did you come up with the ideas for the virtues of the other factions?

Well,  I had  Dauntless first, with it being Tris’ faction and all, I couldn’t see them being their own whole society — they’d end up killing each other, and that’d be the end of them. So I pressed myself to come up with the other kinds of virtues I would choose if I was part of this universe — such as kindness.

Do you get writer’s block a lot?

Oh my god, do I. So, my theory about writer’s block is that you need to diagnose it like you would an illness. So sometimes, you’re just stressed and tired, and you need to give yourself a break. That’s like, the number one cure for writer’s block. I think sometimes when you focus so hard on a problem, you kinda go blank, and you can’t fix it, so you have to do something else. An then the solution will always come to you when you’re doing something else, like washing a dish, or walking down the street, as long as you’re just not fixated on it. But a lot of the time, when I have writer’s block, it’s because the decision I just made wasn’t the right one for the story.
So, when authors talk about a story being kind of outside of their control, I think that’s part of what they mean. If you do something that doesn’t feel honest, doesn’t feel right for the story, you just hit a wall, and you can’t keep going. You have to go back and fix it, otherwise the book stops. This happens to me a lot, especially with really difficult emotional decisions. Usually I want to spare someone’s pain or suffering, because, this is deeply personal to me, these characters feel real to me, they live in head, they’re mine- but then the story is just over. I can’t work on it until I fix it and stop being a coward. For me, I just have to go back and delete a lot. I delete so much work. [Laughs] I think I’ve deleted four books worth of deleted material. I have it all on a document on my computer- I don’t actually delete it, because that’d be silly. But all that material is just kinda of sitting there. Mostly it’s just the same scene written over and over and over again, as I’m trying to figure out what is and isn’t working. If you like to write, you must get comfortable deleting things you like. There’s a phrase writers use — murder your darlings, because we often find that the thing you like the most is the thing that needs to go, which is really a shame. I think that writers are a little masochistic that way.

Are you going to write any other books in the Divergent universe?

But for me, the story with Tris — it worked because of her, and now that that arc of hers is over and we’ve reached the end of that particular story it’s just [shrugs]. I don’t know. I think we’ve reached the end for those books. I don’t see myself doing more — I mean, I wrote four. But really, who knows? Right now though, I’m working on a sci-fi story set in space that will be out next year. That’ll be a new adventure, with new people.

Do you ever have to deal with people who get mad at you over what you’ve written?

[Laughs] Yes. After my last book came out, and the series was over, I got a lot of angry, angry stuff thrown my way. Like, I remember I tweeted something about being locked out of my apartment in the winter, and someone tweeted me back saying, “I hope you freeze to death.” [Laughs] It’s a funny story now because it’s just kinda like — what? Who are you? Like, who are you to be tweeting that at someone? But at the time, it was really heartbreaking. You know, the feeling that, “everyone hates me!” So, you and I will read a lot of books in our lives. Some endings might be better than others, but hopefully every book you read is just one out of the thousands of books you will read in your life. You can be a reader and read as much as you want, but when you’re a writer, you only get to write a certain amount of books, and you have to live with them forever, so they better satisfy you. Because the words you put out there, you carry them around. That’s one thing I’ve learned from that. Everyone out there has a different opinion about the things that they read and watch, which is great — we live in a free society, we get to disagree with each other. But as far as what you put out there creatively, you have to be able to stand behind it. And it makes it easier to receive criticism when you stand behind what you did. There’s a lesson. Lessons in life.

Would you recommend a career as an author, even though it’s rare to be a bestseller?

While it’s rare to be a bestseller, it’s not necessary to have a satisfying career as an author. Bestseller status is great,  but I know plenty of people who are happy just writing a lot and making a decent living. The thing is, a lot of authors have a second job. So they’re working as sometimes teachers, sometimes freelance, at the same time as they’re writing books. It’s not a career you pursue if you don’t love it. Sometimes people are like, “Oh, did you do this to make money?” That would be the silliest thing, You don’t become an author to make money. You become an author because you love writing, and you just can’t do anything else, you just have to write. I recommend it only if writing is your passion, because then it is deeply fulfilling. It’s the most amazing job I could ever have asked for. But if writing itself isn’t your passion, there’s still a lot of way you can work in books, if you love books but writing isn’t exactly your thing. I know a lot of people who got into the industry as writers and are now agents, or editors, because even if they wanted to be around books, [writing] wasn’t their passion.