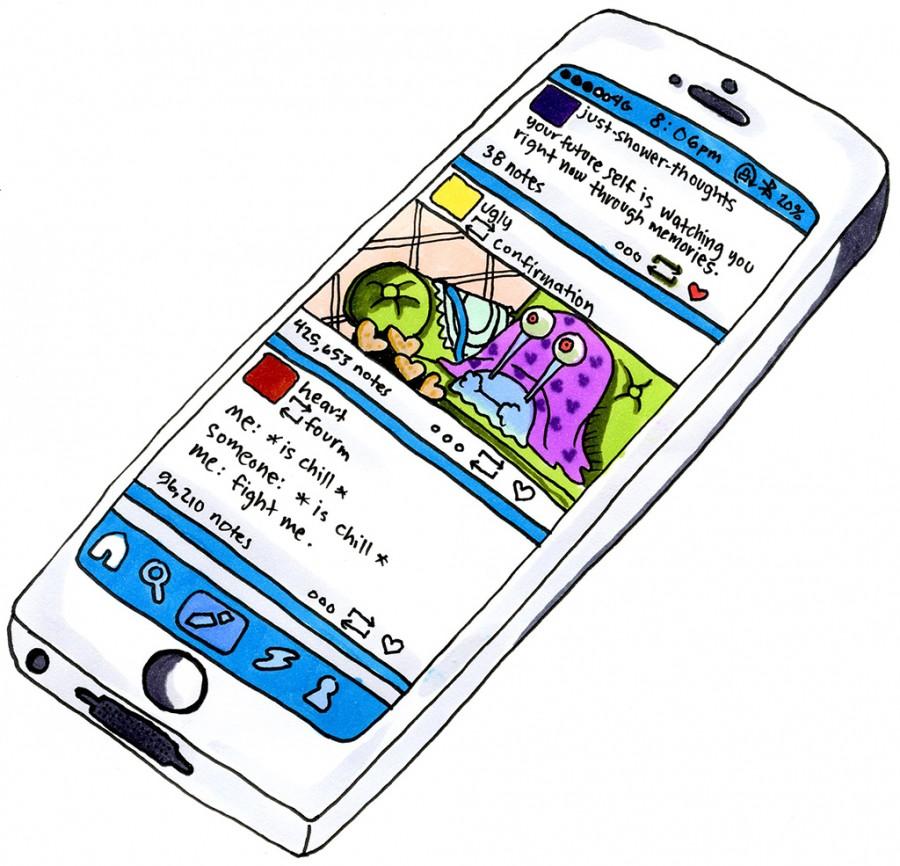 Social Media. Almost everyone has it, but is it becoming more of a hazard than a way to  communicate with friends? Scrolling aimlessly down a Tumblr dashboard could be affecting people in more ways than one.

Internet addiction was first proposed as a psychiatric disorder in 1996, when the Internet started playing a bigger role in people’s everyday lives. Teens have technology at their fingertips whenever they need it.

“When my phone rings, I have an immediate impulse to check it,” junior John Courtney said. “If I can’t check it, I start getting antsy.”

Students’ phones are always with them, whether they’re in their pockets, purses, backpacks or hands. Checking their phones becomes a subconscious habit, and most of the time, they don’t even realize they’re doing it.

“I probably check my phone 25 times a day,” freshman Bella Gage said. “Most of the time, I’m not even getting notifications. It’s just a force of habit.”

Studies have shown that the more often people are on social media, the more self conscious they tend to be. Instagram, for example, is made for the sole purpose of posting pictures and getting likes.

“Sometimes I’ll delete a post if it doesn’t reach a certain number of likes,” Bella said.

It is also scientifically proven when using electronics late at night that brain activity is stimulated for longer, it takes longer to fall asleep, and users are less likely to get sustainable rest. (Social Media and Sleep: Is There a Problem?) Research carried out at the University of Glasgow says that the emotional investment in being available 24/7 is a major factor in reducing sleep quality. (Social Media Obsession Linked to Depression)

“Social media has definitely messed up my sleep schedule,” freshman Julia Dorris said. “I’m on my phone until I can’t keep my eyes open.”

While social media may seem like an innocent way to pass time, it may be affecting you more than you think. Next time, think before you subconsciously unlock your phone.